Once the restoration of the post mill was completed, our team started to look around for something else to do!

The pump was originally rescued by Andrew Norman (in the white coat in the photo below) in 1988. He made a substantial start to restoring it from its dilapidated state. He arranged for some of the parts to be re-cast at the now-defunct Rye Foundry. In 2007 Norman moved from Sussex to Shropshire and Mill enthusiast Peter James (Ockley windmill) set out to find a home for it when Andrew Norman indicated it could stay in Sussex.

Peter James asked around several mills and heard that High Salvington might be interested. After much negotiation and several visits to the site, the Glynde windpump moved to its new home here.

On the day of moving the mill to High Salvington, Peter spent some time photographing the dismantling in detail, as an aid for re-assembly – see the photo below, as they handled the shaft. 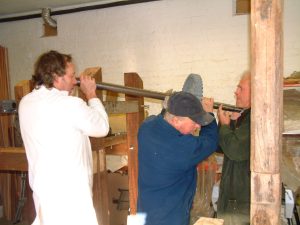 The windpump had originally been used to pump floodwater from a kiln. It was made from spare bits of timber and was a workhorse rather than a thing of beauty.

Nevertheless, our team built new sails and installed a pump. The pump is of the same design that was used to pump water from the trenches of northern France during the First World War. Like the big mill, it is a post mill, but the post is hollow. It contains a crankshaft that connects the turning sails to the pump.

Today, it can often be seen turning in the wind and pumping water.

The wind engine also pumps water, but the design is much more modern – probably the 20th century. The tail automatically adjusts the position of the vanes to the wind. They are very sensitive to every breeze.

We are proud of the wind generator. In 2019 it was hooked up to a set of LED lights. Now, when the wind is strong enough, it lights up the LEDs.  If all six are alight, the wind is very strong.

The Granary was rescued from a farm in East Sussex and brought here on a lorry. It was a bit of a squash on moving day, coming up Bost Hill. It is mounted on concrete posts called stedall stones. They prevent vermin from entering. The steps fold up and inwards, for the same reason.

Donated by the family of a resident, where the pump had resided for many years, it is now in residence at the mill. It was used to water the horses who dragged grain up the hill to be mill and is now a source of interest to visitors young and old. 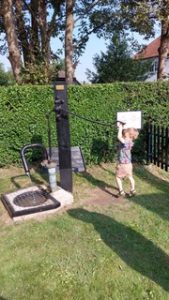