High Salvington Windmill had worked for nearly 150 years when it closed in 1897. In 1907/8 the old timber roundhouse was replaced with a concrete construction – used as a tea room well into the 1950s.

During a gale in 1976, one of the giant stocks carrying the sails broke and a subsequent inspection revealed that all was far from well. The ravages of nature and the deathwatch beetle had seriously weakened timbers in the trestle supporting the 40 tons or so of the buck (the body of the mill).

Before restoration of the buck could commence, the trestle supporting the 38ft (11.5m) high mill had to be renewed. In order to lighten the mill, the stones and machinery were removed and stored.

Later, a large steel frame was erected to support the weight of the buck while the trestle and crown-tree were replaced. The crown tree is a huge baulk of oak sitting on top of the post bearing the whole weight of the mill. 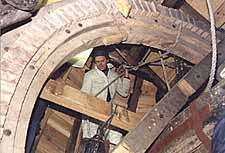 A new 10ft (3m) diameter brake wheel was built as an exact replica of the old one which had crumbled with age and decay. The rim was made of elm, with clasp-arms of oak and the 136 teeth of apple wood. Each tooth tenon was tapered in two directions and precisely fitted its corresponding mortise hole. The wheel was installed in 1985 and at the same time the brake shoe was fitted

Over the next few years, several weakened beams were replaced and the leaking cladding renewed. The tailpole was lengthened by 7ft (2m) and the severely rotted windshaft repaired. The floors and stones were replaced and machinery repaired and re-installed.

Working drawings for new sails were prepared by the volunteers, based on the known dimensions, old photographs and details from other mills. The 58ft (17.6m) diameter sails were built and manhandled into position on the mill during the summers of 1987 and 1988.

n 1998 an inspection of the sails revealed a serious split in one stock. A new laminated larch stock was obtained and shaped and the sails refitted. New grain bins were built similar to the old rotten ones, and missing pieces of the tentering system made. 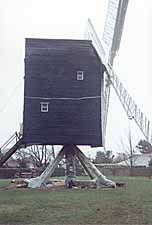 The tail wheel was restored and retoothed, the wire machine or flour grader rebuilt from an old photograph around its original shaft and spur wheel.

The nearby granary was saved from an estate near East Grinstead and restored in 1994. It now features a permanent exhibition and is used for storing grain.

The original style of the roundhouse, known from old photographs, was reinstated in 1990