The 2019 Craft Fair at the High Salvington Windmill was a great success with 25 stalls selling all manner of stitched, painted, carved, and woven items. The weather was kind and the stallholders reported very high interest in their craftwork. Visitor numbers were high, and besides the stalls, entertainment was provided by the Sompting Morris Dancers. having missed out in 2020 we are very much looking forward to this year’s event.

Members of the Windmill Trust started our craft fair back in 1989 with some of the members’ wives who made small items such as lavender bags, purses, and scarves. At first, they took a stall at the fete to sell their wares, along with donated costume jewellery.  Their first venture raised £75.70p for the mill. The separate craft fair held in September started later.

The picture at the top shows one of the many stalls, and the one below shows the countryside turner, making chair legs and other turned items. He is known as a ‘bodger’. Shame that the meaning of the word has changed over time. He certainly doesn’t bodge his work! 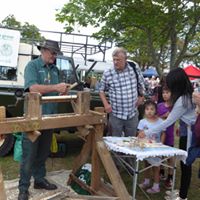